England winger Sancho may have to put in a transfer request to force through a move to Manchester United. (Mirror)

Manchester City’s Spanish midfielder David Silva, 34, will join Lazio when his contract expires at the end of the season. (Guardian)

Gareth Bale will not leave Real Madrid this summer – and the Wales forward, 31, is prepared to wait two years before finding a new club. (Mirror)

Arsenal are looking at a £25m move for Ajax and Netherlands forward Quincy Promes, 28. (Sun)

Newly promoted trio West Bromwich Albion, Leeds and Fulham are all in the running to sign 26-year-old Scottish winger Ryan Fraser, who left Bournemouth at the end of June on a free transfer. (90Min)

Chelsea are eager to sell 25-year-old French midfielder Tiemoue Bakayoko to AC Milan and have cut their asking price. (Sun)

Chelsea are willing to sell Italy defender Emerson Palmieri, with Inter Milan ready to make a move for the 26-year-old. (Football Insider)

Real Madrid are keen to keep 24-year-old Spanish midfielder Dani Ceballos at the club after he returned from his season-long loan spell at Arsenal. (AS)

Leicester and Nigeria striker Kelechi Iheanacho, 23, is the target of a loan move by Turkish club Fenerbahce. (Fotospor – via Sport Witness)

Fulham are considering a move for Arsenal’s 25-year-old defender Calum Chambers, with the Englishman expected to cost about £12m. (Sun)

Bayern Munich chief executive Karl-Heinz Rummenigge is willing to work with clubs who make a “fair” offer for 29-year-old Spanish midfielder Thiago Alcantara, who has been linked with Liverpool. (Mail)

Lazio striker Ciro Immobile claims Newcastle approached his agent over a possible transfer earlier this summer – but the 30-year-old Italian has pledged to stay with the Serie A club. (Corriere dello Sport – via Goal)

Two Premier League clubs and one from the Bundesliga are interested in Arsenal’s versatile 22-year-old English midfielder and wing-back Ainsley Maitland-Niles. (Sky Sports)

Mario Gotze has rejected interest from David Beckham’s Inter Miami as he still wants to play in Europe. The 28-year-old Germany international is without a club after he left Borussia Dortmund at the end of his contract this summer. (Mail)

Liverpool hold an “enormous advantage” in the race to sign Brazilian teenager Talles Magno. The Vasco da Gama forward, 18, is wanted by a host of Europe’s top clubs. (Esporte News Mundo – via Talksport)

West Ham have held initial talks about a new contract that would make 30-year-old English striker Michail Antonio one of their top earners. (Mail) 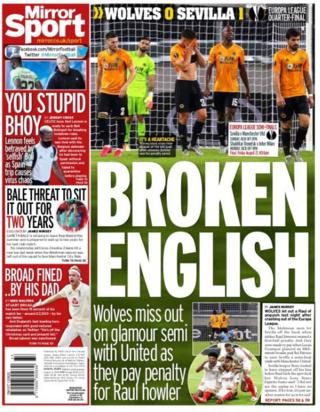