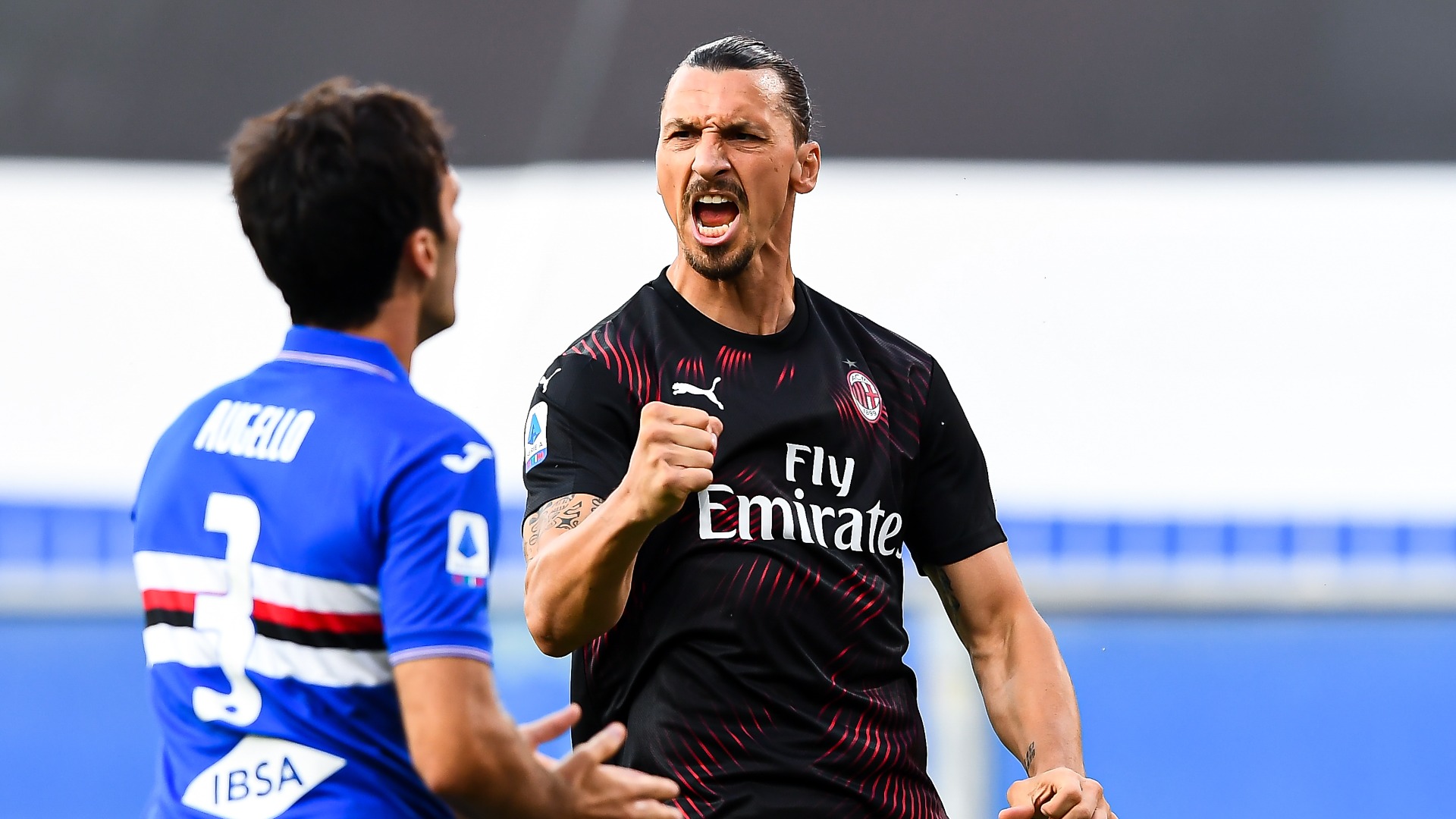 Milan proved far too strong for Sampdoria in Genoa on Wednesday, with Zlatan Ibrahimovic starring for the in-form visitors.

Zlatan Ibrahimovic scored twice as Milan picked Sampdoria apart and extended their unbeaten run to 12 matches in all competitions with a 4-1 victory.

Stefano Pioli’s men have not lost since the Serie A season resumed in June, a run of form that has taken them to sixth place and European qualification while securing the coach an extended contract.

January signing Ibrahimovic has been key and proved the star of the show again with his two goals plus an assist for Hakan Calhanoglu – following a VAR review – in a dominant display at the Marassi that concluded with Rafael Leao’s well-taken fourth.

Gianluigi Donnarumma saved a penalty in the second half but was eventually beaten by a brilliant effort from Kristoffer Askildsen.

Milan were outstanding from the off and needed just four minutes to forge the opener as Ante Rebic’s smart turn on the left created space for a cross that found Ibrahimovic inexplicably unmarked for a simple header.

A second should have swiftly followed, but Theo Hernandez shot straight at Wladimiro Falcone, who bounced back up to steer Davide Calabria’s drive clear.

Falcone then got a toe to Rebic’s low finish, before he again came to Samp’s rescue with a scrambling stop from a scuffed Ibrahimovic effort on the half-hour mark.

The home side somehow made it to half-time just a goal behind and almost capitalised with an equaliser six minutes after the restart as Donnarumma parried Fabio Quagliarella’s free-kick and Omar Colley nodded the rebound over.

However, Milan went straight down the other end and deservedly doubled their lead, with Calhanoglu reaching Ibrahimovic’s knockdown to thrash home. Referee Fabrizio Pasqua initially perceived a non-existent foul on Ronaldo Vieira by the goalscorer but made amends with a visit to the pitchside monitor.

5 – Hakan #Calhanoglu is the first #ACMilan‘ midfielder to have been directly involved in at least one goal for five appearances in a row since Kaká in May 2008. Artists.#SampdoriaMilan pic.twitter.com/WJrsOExHso

Now ruthless where they had earlier been wasteful, Milan had a third when Calhanoglu returned the favour and fed Ibrahimovic to shoot through Falcone.

Donnarumma blocked from close range to deny Quagliarella a consolation and Samp still could not beat the goalkeeper even after Simon Kjaer barged Andrea Bertolacci to the ground in the area, with Gonzalo Maroni’s penalty saved.

It took a spectacular effort to finally get the better of Donnarumma as Askildsen curled into the top-right corner three minutes from time, far too late to cause Milan major concern as Leao instead restored the three-goal cushion in style in stoppage time.

What does it mean? Milan in fine fettle

Milan will have a watchful eye on Roma‘s result against Torino later on Wednesday as they may yet be able to leapfrog the Giallorossi on the final day and avoid the qualifying rounds of the Europa League.

But considering how ordinary the Rossoneri have been at times in seasons past, the entertainment of recent performances alone will send supporters into next term on a high, keen to see their side quickly pick up where they are leaving off.

Indeed, it has been a long time since Milan were this much fun to watch. As Rebic buzzes around up front, the full-backs pile forward, but at the centre of it all is Ibrahimovic.

The giant Swede may now be 38, but he has scored 10 times since January and brings others into play brilliantly. Milan must do whatever it takes to keep him at San Siro.

The one Milan disappointment since football’s return was their Coppa Italia semi-final exit to a rusty Juventus side. They might well have won that tie, too, but for a foolish Rebic red card.

The forward avoided another dismissal here but only after a lengthy VAR review assessed his clash with Gaston Ramirez. Escaping with a booking, Rebic was then hooked at half-time with Milan unable to afford his ill discipline.

– Only Manchester City (34) have scored more goals than Milan (32) in Europe’s ‘top five’ leagues since the lockdown break.
– Milan have scored two or more goals in six straight games in Serie A; the last time they had a longer run was back in 1964 (nine games).
– Donnarumma has saved four penalties in Serie A this season; the last goalkeeper to save more in a single top-flight campaign was Samir Handanovic in 2010-11 (six).
– Calhanoglu is the first Milan player to have a hand in 10 goals in five appearances since Filippo Inzaghi in 2008.

Sampdoria have little to play for against already-relegated Brescia on Saturday’s final day, while Milan will back themselves to extend their unbeaten run further at home to Cagliari.