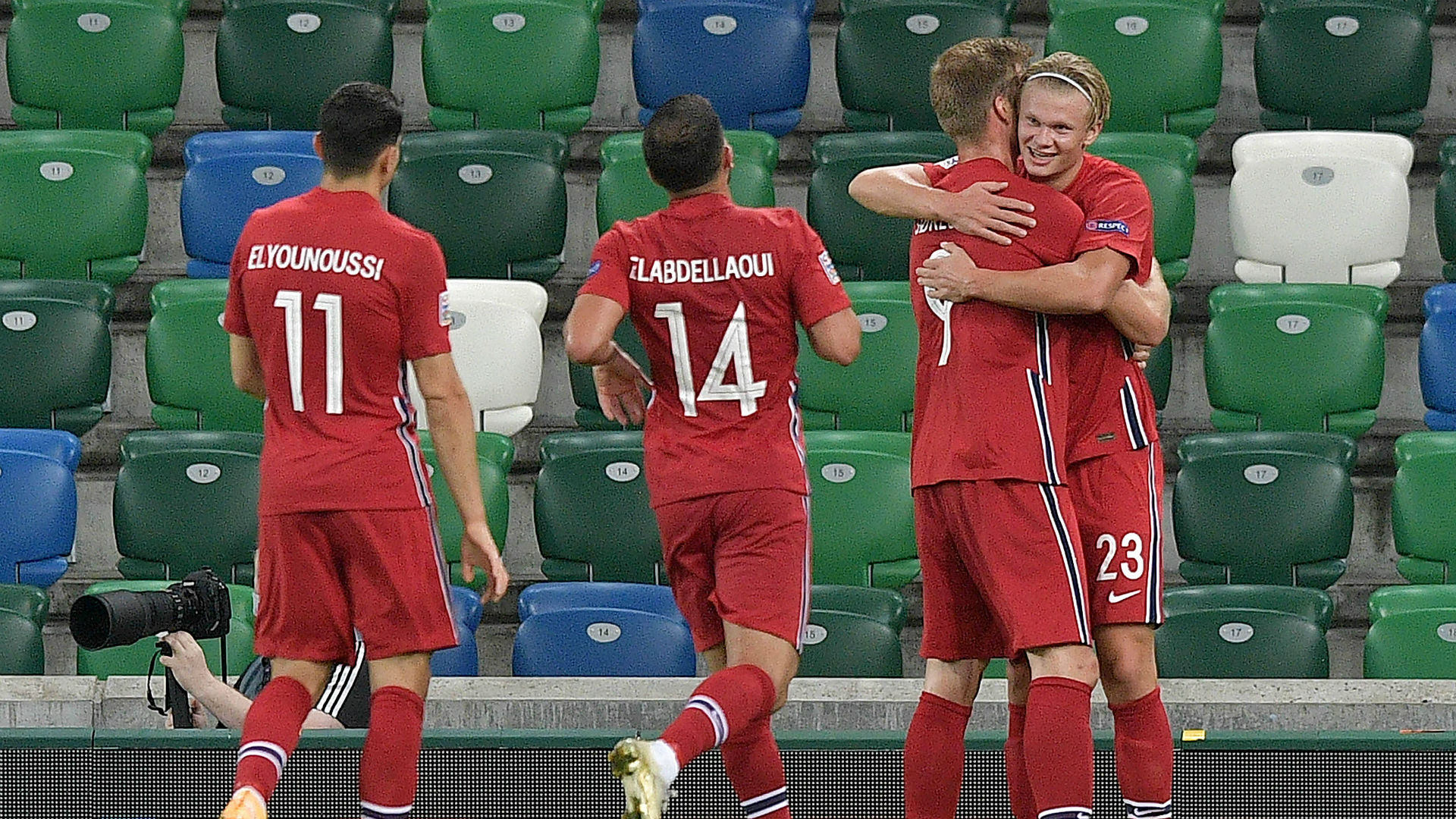 Norway eased to victory in Belfast on Monday to inflict defeat on Ian Baraclough in his first home game in charge of Northern Ireland.

Erling Haaland scored a stunning brace as Norway cruised past Northern Ireland 5-1 in their Nations League Group B1 game at Windsor Park.

In a frantic opening, Mohamed Elyounoussi handed Lars Lagerback’s side a second-minute lead before Paddy McNair levelled after six minutes.

Haaland then fired home a wonderful side-footed half-volley from 20 yards just 67 seconds later before Alexander Sorloth added a third before the midway point of the first half.

Sorloth grabbed a second shortly after the interval, before another fine strike from Haaland after 58 minutes sealed a comprehensive defeat for Ian Baraclough in his first home game in charge of Northern Ireland.

Norway wasted little time signalling their intentions, taking the lead after just 102 seconds courtesy of Elyounoussi’s superb chest control and volley from Stefan Johansen’s lofted ball to the back post.

The hosts roared back only four minutes later when McNair stroked into an empty net from eight yards after Rune Jarstein had pawed away Conor Washington’s effort.

They extended their advantage after 19 minutes when Sorloth steered home Haitam Aleesami’s wonderful left-wing cross at the back post.

Norway started the second half like they did the first, Sorloth stroking home from eight yards in the 47th minute after being selflessly teed up by Haaland, who had latched onto a long ball over the top.

Haaland then wrapped up the scoring 11 minutes later, sumptuously curling home from just inside the area after running onto Omar Elabdellaoui’s headed pass.

What does it mean? Baraclough back to earth with a bump

Baraclough will have gone into this game with a spring in his step after kicking off his Northern Ireland tenure with a last-gasp draw against Romania on Friday, but the 49-year-old was given a harsh lesson in the realities of international football by a relentless Norway outfit.

The hosts’ defending was exceptionally poor and they looked bereft of ideas in attack. He has got his work cut out ahead of next month’s Euro 2020 play-off semi-final against Bosnia-Herzegovina.

The Dortmund man once again showed why he is one of world football’s most exciting young talents. He was a constant handful for the home defence and gave Peacock-Farrell no chance with two unerring finishes.

Cathcart endures a game to forget

The Watford defender was comprehensively outpaced by Haaland in the build-up to Norway’s fourth and offered scant resistance for the other goals.

Both sides are in Euro 2020 play-off semi-final action on October 8, Northern Ireland travelling to Bosnia-Herzegovina and Norway hosting Serbia.