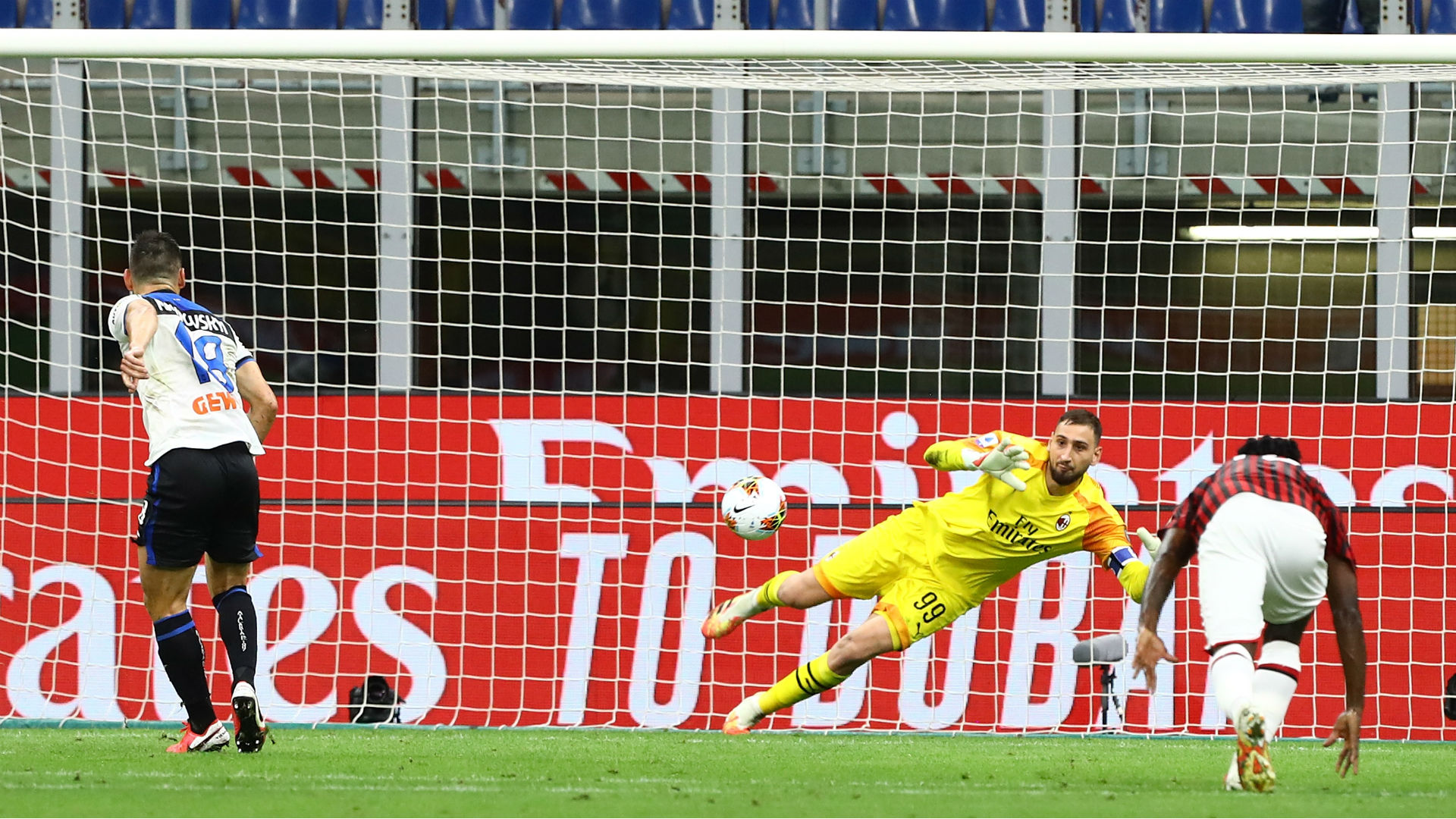 Juventus’ chances of retaining their Serie A title were boosted after Atalanta could only draw with Milan.

Atalanta‘s Serie A title chances were dealt a potentially fatal blow as they were held to a 1-1 draw by Milan at San Siro.

With Juventus having lost 2-1 in dramatic fashion to Udinese on Thursday, Gian Piero Gasperini’s Atalanta side would have moved within three points of the league leaders with a win.

Yet their hopes were virtually extinguished on Friday – Hakan Calhanoglu’s 14th-minute opener proving enough to secure a point for Milan, with Ruslan Malinovskiy seeing a penalty saved for the visitors prior to Duvan Zapata’s equaliser.

The draw leaves Atalanta’s fate out of their hands ahead of their final two matches and inched Juve closer to a ninth successive Scudetto.

Despite a bright Atalanta start, it was Milan who struck first – Calhanoglu catching Pierluigi Gollini out with a wonderful free-kick which curled into the top-right corner.

Atalanta were handed a chance to draw level when Lucas Biglia’s stamp on Malinovskiy in the box was spotted by VAR, only for Gianluigi Donnarumma to save the resulting spot-kick.

But, after Calhanoglu had rattled the crossbar at the other end – albeit from an offside position – Atalanta found their equaliser in the 34th minute, Zapata drilling home after Remo Freuler’s strike deflected into his path.

36 – Luis Muriel (18) and Duván Zapata (18) are the Atalanta’s duo with the most goals scored in a single campaign in the history of the Serie A (36). Tandem.#SerieATIM #MilanAtalanta pic.twitter.com/FXxnrly4pe

Alejandro Gomez went close with a wicked effort prior to the hour, though Atalanta were fortunate not to concede again when Alexis Saelemaekers’ close-range strike was blocked.

Atalanta’s frustration was almost compounded by their former player Giacomo Bonaventura when the Milan substitute hit the post with 17 minutes remaining.

Zlatan Ibrahimovic wanted a late penalty, claiming he had been fouled by Berat Djimsiti, but his appeals fell on deaf ears as both sides settled for a point, with a member of Milan’s backroom staff sent to the stands for his remonstrations at the referee’s decision.

What does it mean? Juve on the brink

It has been a remarkable title race in Serie A this season, but – despite their almighty slip-up on Thursday – Juve have one hand on the trophy. A win against Sampdoria on Sunday will definitely be enough and, depending on how Inter get on against Genoa and Lazio fare at Hellas Verona, a point may suffice.

Milan, meanwhile, sit in sixth, four points above Napoli and one behind Roma, as the Europa League race heads to the wire.

With his equaliser, Zapata scored his 18th league goal of the campaign, moving him level with fellow forward Luis Muriel, and the pair have now netted 36 times between them this term – the most by any two players for the club in a single season.

Atalanta midfielder Malinovskiy has seven league goals to his name this term, but he fluffed his lines from 12 yards and, though Zapata did subsequently pull the visitors level, the penalty miss could well prove to be a decisive moment in the title race.

Milan face Sampdoria in their penultimate Serie A match, while Champions League quarter-finalists Atalanta are on the road again – this time at Parma – before they round off their domestic season against Inter.