Breaking News
Home / Transfers & News / Guardiola can only do so much for Manchester City and the rest is down to the players, insists Walker

Guardiola can only do so much for Manchester City and the rest is down to the players, insists Walker 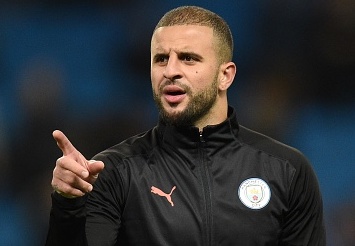 The Citizens face Lyon in the Champions League quarter-finals, with the England defender admitting he wants European glory more than anything else

Kyle Walker says Pep Guardiola can only do so much for Manchester City and that it is ultimately down to the players on the pitch to deliver.

The City boss has not won the Champions League since leaving Barcelona in 2011 and has not got beyond the quarter-finals since he joined the Premier League club.

However his side are strong favourites in Saturday’s last-eight clash with Lyon, although Walker warned that they can’t any afford any errors if they are to get past the Ligue 1 side that knocked out Juventus in the previous round.

“Obviously, Pep can deliver what he delivers in the team talks and we listen, but I think it is down to us as players and what happens in both boxes,” the England defender said.

“You make a mistake in a big game like this and you are going to get punished and vice versa. If they make a mistake in their box, like we showed against Real Madrid, we can punish any team. Hopefully, we can hit the ground running, get a good start in the game and get the momentum going and really take the game to them.”

Walker is hoping that City’s superior sharpness could be a telling factor after football in England restarted in mid-June with Guardiola’s side playing 13 times in the last eight weeks.

Conversely, Lyon’s 2-1 defeat to Juventus was just their second game since March, and City will aim to come out flying at the Estadio Jose Alvalade in Lisbon.

However, Walker knows how dangerous a side Lyon can be after they beat City at the Etihad Stadium and drew in France in last season’s Champions League group stages.

“[Beating Madrid] gives us a little bit [of confidence] because the teams such as Paris Saint-Germain and Lyon have not really played much football so hopefully we can use that to our advantage,” he added.

“They have got good players. We have watched a few clips of them and they look a really good team so it is going to be very difficult but we are just going to use the game plan, listen to the tactics from the boss and hopefully that will see us over the line.

“I think [knocking out Juventus] speaks volumes in itself. This year they don’t have the players that they had when we played against them but, again, they have just knocked Juventus out and you need to be a very good team, very disciplined to beat Juventus over two legs.

“It is going to be a difficult game but I feel it can swing in our way that it is over just the one leg and we can really attack the game and play every game like a final.”

Walker has won every domestic medal with City since moving from Tottenham in 2017 and admits that the Champions League is now the competition he wants to win more than any other.

“I think if you had asked me this when I signed here I would have probably said that the Premier League was the big one for me having not won it before I came here,” he said.

“Now I have collected two of them and a number of others and this is the one that I want, and I can probably speak on behalf of the whole squad and Manchester City as well for what they need as a club to put them onto that next pedestal.”