England are in a dominant position at the end of day two in the series-deciding third Test against West Indies after a fine all-round performance from Stuart Broad.

The England seamer took 2-17 as the West Indies were reduced to 137-6 at stumps in reply to the hosts’ first-innings 369.

That much might have been expected but his 33-ball half-century to take England to that score was more of a surprise, especially given he walked in at No 10 after England had just lost 4-18 in the first hour of the day.

Having scored England’s joint-third fastest fifty in Test cricket and shared a ninth-wicket stand of 76 with Dom Bess, Broad was eventually dismissed for 62 before he and his fellow England seamers got stuck into the Windies top and middle-order.

Prior to Broad’s onslaught, it had been all West Indies in the morning session as Shannon Gabriel (2-77) and Kemar Roach (4-72) utilised the second new ball brilliantly.

Ollie Pope had already been dropped at first slip by Rahkeem Cornwall by the time Gabriel, the unfortunate bowler on that occasion, pegged back his off stump with a beauty. The Surrey youngster was unable to add to the 91 he made on day one.

Roach then claimed his 200th Test wicket as Chris Woakes (1) chopped on and when Jos Buttler, who had started brightly, nicked Gabriel to second slip for 67, the Windies were into the tail.

Roach added No 201, another catch for Jason Holder at second slip sending Jofra Archer (3) on his way, and the end of the innings seemed nigh. Certainly no one expected England still to be going an hour later. 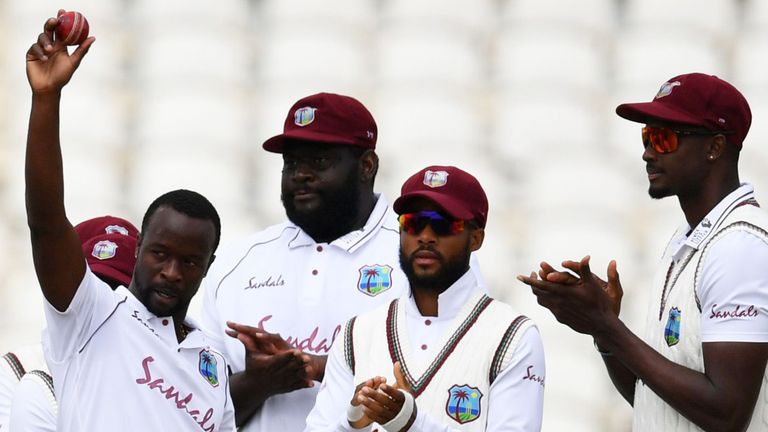 Broad signalled his intent by pulling Roach over midwicket for six and the shots just kept coming, Gabriel was drilled through the covers while Holder took particular punishment, including being smashed back over his head as the England No 10 raced towards 50.

Another boundary, pulled behind square brought up the milestone but with the field spread, ones and twos were added to the big shots as the score kept rising.

James Anderson (11) was the last man to go on the stroke of lunch, edging Holder (1-83) to Cornwall at slip, and somehow, despite a collapse of 4-18, England walked off feeling they had had the better of the morning.

Broad soon got to work with the ball in the afternoon session, nipping the ball away from Kraigg Brathwaite (1) to find the edge and strike in his first over, Joe Root taking the catch at first slip.

It should have been two a couple of overs later, Anderson this time drawing the edge from John Campbell but Ben Stokes dropped a regulation chance at second slip.

Campbell progressed to 32, in an innings typically punctuated by attractive shots but once more in this series he was unable to convert the start. It took a snorter from Archer (1-55) to dislodge him, a bouncer after five full balls to surprise the left-hander and take the shoulder of the bat – Rory Burns was on hand to take the simple catch at gully.

Anderson joined the party with wickets either side of tea to plunge the tourists into real trouble. His first was the archetypal Anderson wicket, angled in to the right-hander before moving away late to find the edge. Shai Hope (17), like so many before him, had no chance as he feathered it behind. 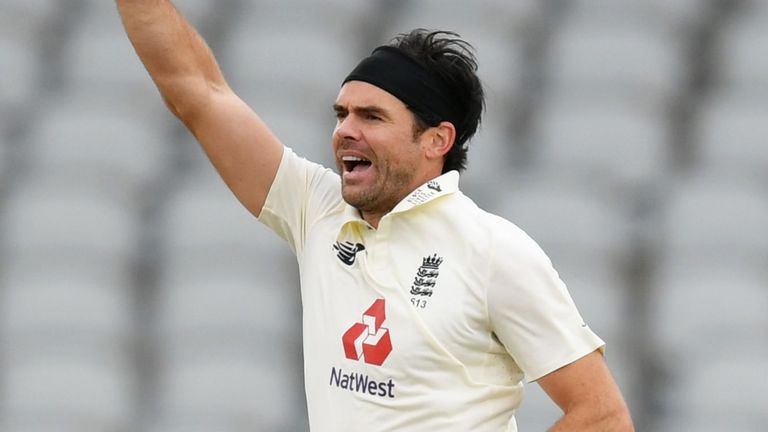 The other side of tea, Anderson (2-17) found the other edge of the bat, Shamarh Brooks (2) caught behind after a nip-backer brushed the inside edge on the way through to Buttler.

Chase and Blackwood dug in trying to halt England momentum but the plan came unstuck when Broad hit Chase (9) plumb in front with a booming in-swinger, starting his celebration long before the umpire raised his finger.

Blackwood (26), now with captain Holder for company, was playing nicely and brought up the 100 for the Windies with a glorious straight drive.

However, he tried one drive too many and lost his middle stump, Woakes (1-39) easily getting the ball through the wide-open gate with another ball that nipped back off the seam.

England had Shane Dowrich (10no) in real trouble time and again, peppering him with short balls, but the wicketkeeper just about survived – although Archer was left wondering quite how after a leading edge looped agonisingly over gully as the batsman fended off a fierce bumper.

Bad light saved Dowrich anymore punishment before the close and he and Holder (24no) will try to claw the West Indies back into the game on day three, with the first milestone being the 33 runs required to avoid the follow-on.

Watch day three of the crucial third #raisethebat Test between England and West Indies from 10.30am on Sky Sports Cricket.