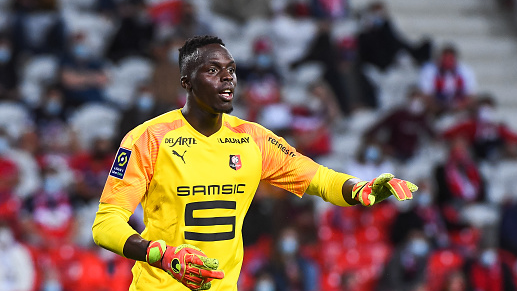 The French defender does not want to see prized asset leave the club, but concedes that he is ready to step up to the next level

The 28-year-old shot-stopper helped Rennes finish third in Ligue 1 last season, and the Blues are eager to bring him in to compete with Kepa for the No.1 jersey at Stamford Bridge.

Kepa has struggled to live up to his £72 million ($93m) price tag since moving to west London from Athletic Club, and even lost his place in Frank Lampard’s starting line up to veteran ‘keeper Willy Cabellero post-lockdown.

Mendy’s arrival would complete a hugely successful summer transfer window for Chelsea, who have already spent over £200 million ($258m) to sign Hakim Ziyech, Timo Werner, Ben Chilwell and Kai Havertz ahead of the 2020-21 season.

The Frenchman has been tipped to seal a high profile switch by his Rennes team-mate Da Silva, who told Telefoot on Tuesday: “We are a little selfish, we don’t want to lose Edouard Mendy.

“But it’s part of football and the transfer market. He’s a great goalkeeper who deserves what happens to him.”

Rennes look set to make a sizeable profit on Mendy if ends up joining Chelsea, having signed him for a mere £3.5m from Stade Reims in the summer of 2019.

Julien Stephan’s side are, however, facing the prospect of heading into their first-ever Champions League campaign without their first-choice netminder, and have reportedly already lined up Paris Saint-Germain‘s Alphonse Areola as a potential replacement.

Mendy is due to appear in Rennes’ next Ligue 1 fixture against Nimes on Sunday, but Chelsea will hope that they can secure his services in time for their Premier League opener away at Brighton on Monday.

Lampard’s new-look squad will be expected to improve on a fourth-place finish last term, with a huge clash against reigning champions Liverpool set to follow their trip to the Amex Stadium on September 20.